Loners (Samotáři) was the first Czech film I saw in a movie theatre. I was on a teacher training course in Prague at the time, and there was a buzz going around that it was the Czech answer to Trainspotting. I ended up getting completely rat arsed before, during and after the screening, so I couldn’t remember a single thing about it.

That complete blackout has always made Loners something I’ve been eager to revisit. Trainspotting flash-froze a zeitgeist so perfectly that it felt dated by the time it came out on video, so if Loners truly was in any way equivalent, how would it stand the test of time? It’s now half my life since that drunken cinema visit – I was in my early twenties then. What, if anything, would the movie say to me now as a father of two in my early forties? 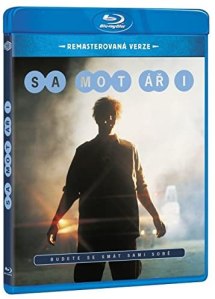 Well first up, the Trainspotting comparison was way off. I can kind of see why people at the time were making the analogy, as it focuses on the lives of twenty-somethings in the city and there are drugs involved, albeit ganja rather than smack. Other than that, Loners is a very ho-hum, meandering, mildly amusing look at the lives of a group of young-ish people at the turn of the Millenium. It’s unfair to compare the two really, but since I’ve already started I may as well continue by saying it also lacks Trainspotting‘s vivacity, bleak humour, empathy, and directorial verve. If Trainspotting was a howl of defiance in the dark, Loners is more like a shrug of indifference in a Starbucks…

Robert (Mikulás Kren) works for a travel agency and has a cynical attitude towards life. He has a magician’s goatee, a sleazy leather jacket and records anything resembling real emotion on his camcorder. Thanks to him, Hanka (Jitka Schneiderová) and Petr (Sasa Rasilov) decide to split up, but not without confirming it with a toss of a coin (typical of the film’s blasé attitude to relationships, life, and pretty much everything.)

Hanka has little to define her character other than she’s beautiful and has problems with her controlling mother. She also has a deranged stalker, Ondrej (Ivan Trojan), who happens to be a respected neurosurgeon. Ondrej is married to Lenka (Dana Sedláková) and has a pair of irritating twin daughters. Later Hanka gets together with Jakub (Jirí Machácek), a perpetually stoned removal man. Their newfound romance is threatened when Jakub’s chronic weed habit makes him forget one very important personal detail.

Petr is a self-absorbed DJ with a penchant for wearing black war paint on-air and spilling his guts about his break up to his listeners. Petr starts taking an interest in Vesna (Labina Mitevska), a Macedonian bartender who came to Prague because it’s a UFO hotspot (?), and does a nice line in body shots (remember when that was a thing?).

Director David Ondrícek does his best to interweave these stories, but never decisively lands on a cohesive tone. It feels like the film is supposed to be a wry look at turn-of-the-century angst, and the tagline “come to laugh at yourself” suggests it’s trying to capture something about people’s lives at this particular place and time. However, the film is so scantily written and infused with such apparent ennui that it’s hard to see how anyone would connect with it. A friend tells me it plays well as a stoner comedy, and I appreciate some things may get lost in translation. But for the most part, I found it mirthlessly, irritatingly, self-consciously, quirkily empty.

The whole film is threaded with a slightly absurd edge and works best when it takes a big swing at a surreal moment. Notably when Ondrej plans his break from his family by persuading a stage magician to make him disappear, or when Robert arranges for a group of Japanese tourists to visit Hanka’s parents to see how “real” Czechs live. The latter features some nice observations – they choose to eat Svíčková with dumplings while listening to Smetana’s Má vlast to demonstrate how typically Czech they are.

Loners is a film preoccupied with reality and realness, fate, love lives, growing up, and changing lifestyles, without ever finding anything meaningful to say about any of it. The film doesn’t look particularly dated, if only because it has that flat, undistinguished look of a lot of early 2000s Czech films. What did it say to me as a father of two in my early forties? Not much, apart from this: if anyone tells you a foreign language film is the local equivalent of Trainspotting, they’re probably full of shit.