Phew! I’ve finally made it to 100 posts! It has been quite a ride with plenty of great movies along the way, but it wasn’t always a smooth one. This time last year the blog was languishing at around 25 reviews and I was struggling to find the enthusiasm to carry on with it.

Firstly, I hadn’t seen enough films to fully eradicate the more negative preconceptions I had about Czech movies at that point. Secondly, I realised that I’d picked a topic so niche that almost no-one was visiting the site, which was a little disheartening.

So to celebrate reaching the 100th post I’ve decided to create a top 25 list of my favourite Czech movies so far. It was a tough task with plenty of soul searching involved, and you will see that there are some notable exclusions. This is partly because I have tried to capture the sheer diversity of the films I’ve seen to date, which means some very good movies got the chop!

From the beginning, this project was intended as my personal exploration of Czech cinema, trying to get a handle on it from the perspective of a knowledgeable outsider. Therefore I have also tried to make a list that might be handy for someone who wants to get into Czech movies but isn’t sure where to start.

Trying to make a list packed with great picks for other people while also staying true to both my personal taste and critical pretension wasn’t always easy. Take for example Jiří Menzel. I have some misgivings about his films – many of them are basically the same – but he is such a huge presence in Czech cinema that I still ended up with four on my list. It will be interesting to see if they get whittled down as I see more movies in the future.

Also, I have tried to give modern Czech movies a fair shout. I know there is a common belief that Czech cinema isn’t a patch on its heyday in the 60s and 70s, and that is probably true. However, there are some very solid movies from this century out there – films like Zelary, The Snake Brothers, and The Teacher wouldn’t look out of place on the Best Foreign Language ballot at the Oscars. Nevertheless, they still lack the magic of the classic stuff and it is a reflection of this that none of my top 10 is less than 40 years old.

Speaking of which, it is crazy when you look at the quality of the stuff being made in this country during the Czechoslovak New Wave. Talk about troubled times producing great art. The cinematic movement was already well underway before the Prague Spring, yet the sheer explosion of gobsmacking films concentrated around that historic time is simply dazzling.

Before we get into the list, I also want to mention that I would still be some way off the 100 mark without the terrific contributions of Kai-Ming, Jakub, Jack and Catherine. Although I originally intended this as a purely personal blog, I did accept a little help to bulk out the content. Otherwise, with my rate of production, it would only be useful as a resource sometime around the dawn of the next epoch. Thanks guys!

So let’s get cracking! I’ll update the list on a semi-regular basis, every 25 or 50 films or so. I might also do a Bottom 10 at some point as well…

I grew up loving Ray Harryhausen monster movies and the fantastic tales of Jules Verne, so it is no wonder I was quickly smitten with the films of Czech animation genius Karel Zeman. Popping up on Netflix, Invention for Destruction came as a tonic during a shitty lockdown period. It a lighthearted ripping yarn involving a secret weapon, a fabulous steam-powered submarine, a dashing hero, a master criminal in his volcano lair. Zeman’s inventions and the mastery of his craft are a constant delight, and it is great entertainment for kids, too.

“Shooting in crisp black and white, Zeman employs an astonishing array of special effects and camera trickery to recreate the look and feel of the engravings from the Jules Verne novels. Live-action footage is frequently sandwiched between several panes of foreground and background to make it look like the characters are moving within an illustration. Zeman laboriously added a cross-hatched pattern to almost everything to complete the illusion.”

Jiří Menzel, who sadly passed away last year, was a massive figure in Czech cinema. I tried to limit the number of his films I included in this list but despite my best efforts, I still ended up with four. I have difficulty ranking his work because as entertaining as they undoubtedly are, all the ones I’ve seen so far has basically been the same, and you could argue a case for the inclusion of any of them. The Oscar-nominated My Sweet Little Village is a charming, heart-warming comedy about the relationship between a disabled young man and his long-suffering neighbour and work colleague. Menzel regular Rudolf Hrušínský also appears as a gruff doctor.

“Menzel never misses an opportunity to extol the virtues of rural living over life in the big city. To this end, Hrušínský serves as a spokesperson, delivering lengthy passages of verse about the beauteous countryside, and reminding his fellow village folk that life isn’t so bad while they have beer, woodland, and gorgeous girls following the city trend of wearing no bra. The film basically says: chill out, grab a cold one and enjoy your lot in life, because it’s all pretty sweet.”

The tale may be as old as time but there are few more gruesome versions than Herz’s intensely dark and atmospheric adaptation. The Beauty part might just be the weakest aspect of the film but The Beast is truly frightening and psychotic creation. From the scary opening attack to the Beast’s fog-shrouded mansion, Herz takes the story deep into horror territory, and I loved it.

Regular readers of this blog will know that I have a general loathing of Michael Viewegh adaptations, so just to show it’s no irrational beef I also have one in my Top 25. Those Wonderful Years that Sucked is a genuinely touching coming-of-age tale that spans three decades in the life of a regular family, from the Prague Spring to just after the Velvet Revolution. Despite a few typically queasy Vieweghian moments, I would still say it makes a great introduction to Czech movies and films about life under Communism.

“Much of the charm of Those Wonderful Years That Sucked is the skilful way Nikolaev spans such a long period of time, never losing focus of the dangers facing the family while maintaining an upbeat, comic tone. Even the final third, where the father is driven to the verge of a mental breakdown by the constant fear of surveillance, is treated with a featherlight touch and is all the more effective for it.  So many comedy-dramas grind to a halt when things get serious, an obstacle Nikolaev’s film hurdles with bagfuls of good grace.”

Legendary surrealist filmmaker Jan Švankmajer is such a huge figure that I had to include at least one of his works. I was originally going with Alice, thinking it would be a safe introduction because almost everyone is familiar with the source material. The trouble is, Švankmajer’s style is often so aggressive and unsettling that it becomes a little arduous when drawn out to feature-length. Dimensions of Dialogue has all the best things about his visionary work packed into a very manageable 14-minutes – tactile stop-motion animation, a mordant sense of humour and a riot of ideas.

“While it may be short, Dimensions of Dialogue is vivid, vulgar, gross, funny, and best of all, thought-provoking. If you like movies to give you something to think about, you should delve deeper into the weird world of Jan Švankmajer.” 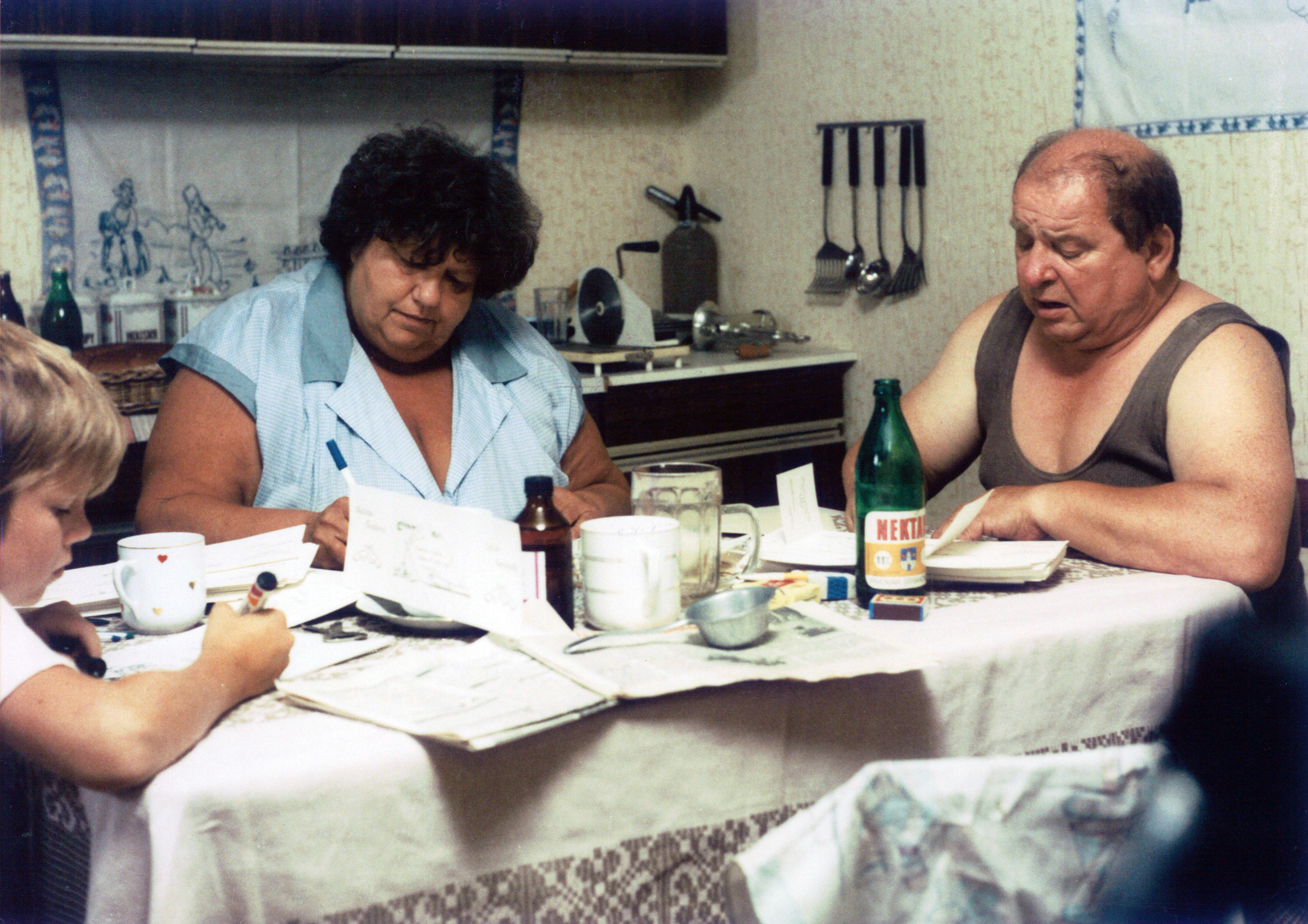 I know a few people will think I’ve lost my mind by including this movie on my list! People either really love Troška’s bawdy comedy or they really, really, really hate it. I think what that boils down to is that it portrays rural Czechs a little too accurately for some people’s taste and they feel embarrassed by it. It is definitely no great work of art, but my aim from the beginning of the blog was to review all Czech movies, not just the classics. Despite how lowbrow Sun, Hay, Strawberries obviously is, I think it is a genuinely important cultural item. It’s a little like the Carry On movies in Britain, reflecting a certain aspect of the people and their country.  Plus it made me laugh more than some of the more well-respected comedy classics!

“Make no mistake, Slunce, Seno, Jahody is extremely loud, crude and stupid. To give an example of the level of humour, one scene features a senile old lady trying to hide a turd from her overbearing daughter. That’s it, that’s the whole joke. However, the film has a directness that I appreciated, unlike the ponderous pace of so many Czech movies I’ve seen so far. It bounces along nicely with goofy energy that I found genuinely charming.”