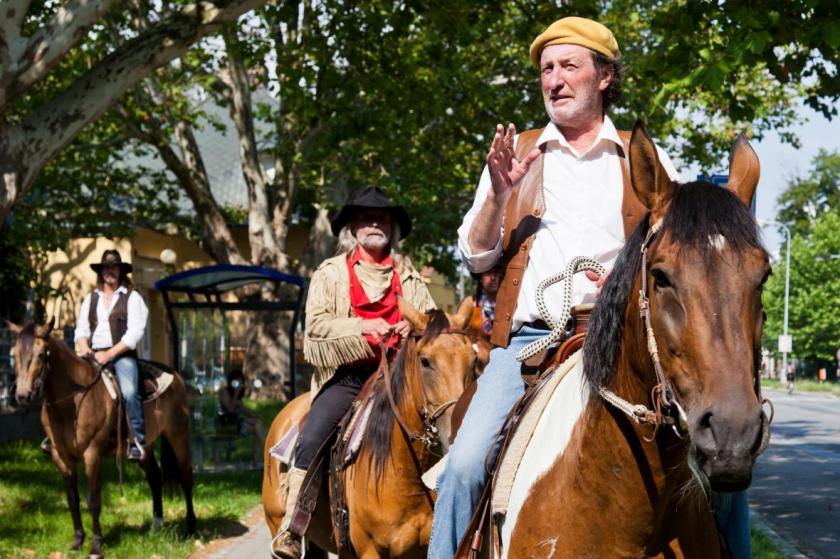 Later this year, Keanu Reeves and Alex Winter will appear in Bill & Ted Face the Music, almost thirty years after their last outing as the airheaded rockers, Wild Stallyns. Reeves can seemingly do no wrong these days but the omens and the trailer don’t look good.

Alex Winter may have had a quiet couple of decades career-wise, but Reeves has become a cultural icon, the internet’s favourite celebrity nice guy, and has been kicking ass well into his fifties and making it look easy in the John Wick movies. So why does he need to give a belated victory lap as the character that helped make him a huge star? It rarely fares well.

Take a look at Dumb or Dumber To. Or rather, don’t. Jim Carrey and Jeff Daniels had built well-respected, award-winning careers before they put another shrimp on the barbie and reprised their roles as the childish, dim-witted Lloyd Christmas and Harry Dunne. It worked when they were younger, but seeing two middle-aged men behave in such a way was just pathetic, and even a little bit creepy…

Even that seemed fresh compared to The Odd Couple II, shuffling into theatres fully thirty years after the cherished original. A doddery Jack Lemmon and Walter Matthau teamed up again with screenwriter Neil Simon to deliver a critical and commercial failure, nominated for Worst Sequel and Most Painfully Unfunny Comedy at the 1998 Stinkers Bad Movie Awards. It was a sad end to three glittering careers – Simon’s final screenplay, Lemmon’s last onscreen role, and Matthau’s penultimate performance.

Perhaps it will always be a losing formula because nostalgia for the originals is so high and audience’s taste for comedy, maybe more than any other genre, changes so drastically over time. In the Czech Republic, the prolific and much-lauded Bolek Polívka fell into a similar trap reprising his role as Bohus in The Inheritance or You Shouldn’t Say That, a coma-inducingly weak follow up to Věra Chytilová’s popular 1992 film The Inheritance or Fuckoffguysgoodday, 22 years after he created one of his signature characters.

In the original film, incorrigible drunk and layabout Bohus suddenly becomes rich when he inherits a sizeable fortune and portfolio of businesses from his deceased father. Now we pick up with the character as he’s just laid his wife Vlastička to rest. He’s still loaded but has smartened up his act, laying off the booze for several years. The grief, however, knocks him off the wagon, just as some lawyers come sniffing around trying to recover a potentially bankrupting amount of money allegedly owed to his former lawyer, Dr Ulrich (Miroslav Donutil, who pops up in a late game-changing cameo). Some other guy wants to sell him a castle, and, pissed out of his face and grieving, Bohus reverts to his boorish and anti-social former self, much to the chagrin of his daughter (played by Polívka’s real-life daughter Anna Polívková, in a nothing role.)

It’s very thin stuff. The original film was no classic, but at least had the courage of its convictions, creating a monstrous village idiot unleashed on the world by stupendous amounts of money, and was as belligerently crass and charmless as its central character. That felt like an artistic choice, satirizing the dangers of capitalism and copious wealth while country was just beginning to figure out whether capitalism was a good thing for it or not.

The Inheritance 2 (to use its unofficial title) doesn’t have much to say about anything, instead taking a sitcom tone. Most damagingly, Polívka, writing the part for himself, forgets to create any situations or comedy for his character. There’s plenty of setup with no payoff – Bohus starts seeing the ghost of his former wife, that comes to very little; there’s a scene involving viagra that looks like it will at least follow the hoary old tradition of viagra jokes, but doesn’t have a punchline; and the film sets up Bohus as the underdog against a pair of stuffy lawyers, but fails to up the stakes in any significant way and tell us why we should care.

There are some mildly entertaining moments, particularly in the middle section of the film when Bohus, reverting to type, ruffles the feathers of a film director on set, disrupts a wine tasting in a cellar with his lowbrow behaviour, and annoys a snooty waiter in a posh restaurant. The uncultured slob puncturing the pomposity of a bunch of snobs is usually a winner, and there are traces of Rodney Dangerfield’s vulgar new-money millionaire in Caddyshack in these moments. Just nowhere near as funny.

Polívka is watchable as ever. He’s a commanding screen presence and capable of making something of even the weakest material (see also: Angels) but he hasn’t served himself well here with a mirthless script. Worse still, he’s created situations that feel like they’re massaging his own ego rather than serving his character – Bohus falls for a stunningly beautiful, successful actress at least thirty years his junior, who is somehow entranced (albeit briefly) by his boorish antics.

There are flashes of the old Bohus and, if one wants to be charitable, you could say the difference is that the character has become older, mellower, wiser. But it never tracks as serious character development – his uncouth outbursts feel more like a tribute act to the old Bohus.

Mostly it’s just mawkish, boring and very drawn out, making a usually manageable hour-forty feel like forever. Despite its occasional moments, better put The Inheritance or You Shouldn’t Say That down as: I watched it so you don’t have to.

If my review hasn’t put you off and you still want to check out the movie, you can watch it right HERE with our View on Demand partner Eyelet