Like many films that were considered problematic by the communist regime in Czechoslovakia at their time of release, Karel Kachyňa’s The Ear was banned until 1989. Unlike the surreal elements found in Case for a Rookie Hangman, this film takes a more grounded approach to explore the fears and anxieties experienced by the country’s inhabitants. The film centres around a married couple trying to get through a night of desperation after they suspect their home might be under surveillance by the government.

The film begins with the couple coming home from an evening at an official dinner party. The husband, Ludvík (Radoslav Brzobohatý), is a reserved government official, and his wife, Anna (Jiřina Bohdalová), is an outspoken alcoholic. From their first interactions, we can already get a general idea of their relationship. You get the sense that they’ve been at odds for a while now, seeing as how they constantly bicker and throw verbal jabs at each other every chance they get. 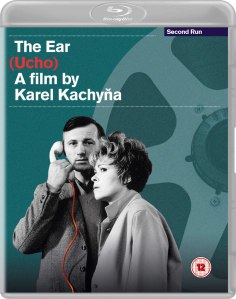 Buy The Ear from Amazon HERE

Once they arrive at the entrance, they notice that they’ve misplaced the keys to the gate and find other means of getting inside, only to realize that the doors had been open and there’s been a power outage. Ludvík also notices some strange men lurking around the garden and a car parked on the other side of the street. This causes him to become more paranoid at the thought that he might be targeted by the government…

The film intercuts with flashbacks from the reception, where Ludvík has conversations with various members of the party. Some of these scenes are filmed from Ludvík’s point of view, which adds to the sense of unease as we see close-ups of people who could be responsible for the situation he finds himself in. We also notice how Anna enjoyed her evening by getting drunk at the party, which is understandable knowing how miserable her marriage is — especially since Ludvík completely forgot their 10-year anniversary.

The disappearance of some of Ludvik’s associates, including his son’s godfather, makes him believe that he might be the next person to disappear. This leads to him getting rid of any documents that might potentially incriminate him by flushing them down the toilet and setting them on fire. Once Anna realizes the situation they find themselves in, they actually work together for a while before they spiral back into their usual patterns of resentment. The decision to stay focused on the private lives of this couple gives the film a sense of voyeurism as the arguments become more and more personal as the film goes on, which cleverly ties in with the overall concept of the film — the general lack of privacy.

Although the film focuses on the anxiety caused by the overbearing presence of the government, I found myself more invested in the interaction between the couple. The constant push-and-pull of their relationship makes for an interesting dynamic that really holds the film together. In one of the few moments of tenderness between them, they embrace as they believe they are about to be separated by government officials. This was actually surprising since most of the film revolves around them arguing about their life together, as they try to locate the “ears” that might’ve been placed inside the house. The situation has actually brought them closer together since they now share a common goal — survival.

In addition to the overall concept, the film does a good job establishing tension through its presentation as well. The beginning of the film starts out with a darker look that’s brilliantly juxtaposed with the disorienting bright lights found in the flashbacks to the party. These scenes are made even more uncomfortable with the eerie music that accompanies the celebration of these high-ranking officials in what’s supposed to be a “pleasant” environment.

All in all, The Ear is a remarkable thriller that explores the paranoia of a country due to the omnipresent nature of its government while also being a compelling domestic drama driven by the strength of its characters. The fact that we, the viewers, are as intrusive to the life of these people as the dreaded “ear” makes for an interesting voyeuristic experience that’s hard to look away from. But if there’s any other takeaway from this film, it’s that we should probably just mind our own business.