Living here in Brno, Czech Republic, I’ve spoken to many other expats over the years about Czech film. Most don’t watch them – sure, they’ve seen a few of the biggies, but generally people don’t bother unless they have to. They tend to find them slow, boring and difficult to engage with, and Czech humour doesn’t seem to translate well on film – to those not on the right wavelength (and I include myself in that category), it tends to be a little too bitter and deadpan, or too broad and nostalgic.

As a Brit, the former usually works better for me, as our own humour tends toward the straight-faced and understated, whereas the broadest excesses of Czech comedy reminds me more of the bawdiness of our 70s sex farces. 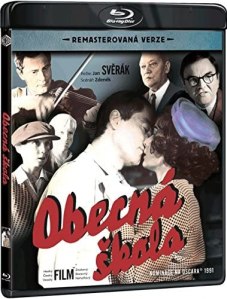 The Elementary School (Obecná škola) is a sweet-natured coming-of-age tale set just after WWII, “after the Fascists have been defeated, and before the Communists have won.” It swings towards the broad and nostalgic end of the Czech comedy spectrum, but is a genuinely funny movie. Oscar-winning director Jan Svěrák (Kolja, Dark Blue World) demonstrates a deft touch for slapstick and draws excellent comic performances from his small cast.

It tells the tale of an inquisitive, imaginative young boy called Eda (Václav Jakoubek), who lives in Prague’s suburbs with his stuffy father (Zdeněk Svěrák, the director’s dad, who also wrote the screenplay) and frustrated mother (Libuše Šafránková – Three Wishes for Cinderella, Kolya). Eda’s class is the naughtiest in Czechoslovakia, driving their timid teacher mad with bad behaviour.

The school’s headmaster, played by the legendary Rudolf Hrušínský (The Cremator, Capricious Summer) resorts to drastic measures, employing a former war hero, Igor Hnízdo (Jan Tříska) to bring the unruly mob back in line. Hnízdo is a colourful character: his involvement in the war might be somewhat exaggerated and his previous post at a girl’s school ended in scandal. 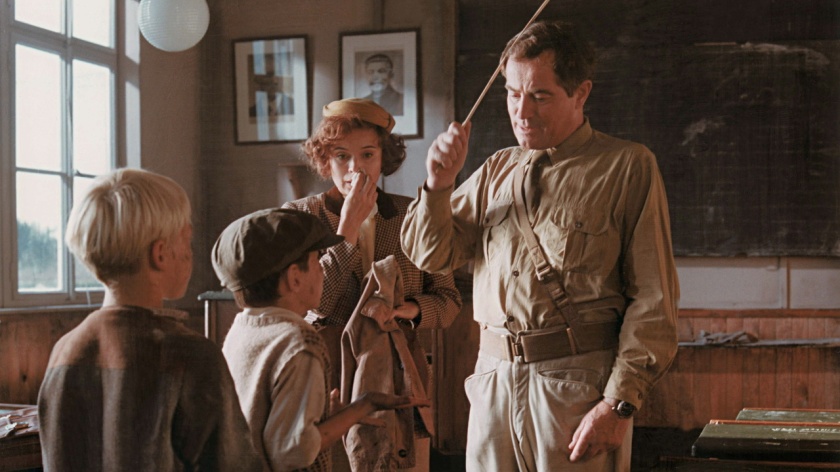 He’s a lady’s man, and the suggestion is that his interpretation of “lady” extends to the younger end of the age range. He carries a gun in class and doles out corporal punishment to his students. Despite his harsh methods, he inspires loyalty and patriotism in the boys of Eda’s class, who stand behind him when scandal erupts, surrounding his involvement with two very young twins from the village.

The winning team of Svěrák Jr and Snr creates a richly nostalgic film packed with inventive sight gags, although suffers from its anecdotal nature. The nominally central character of Eda is a bystander as a series of comic set-pieces unfold at a leisurely pace. Anything resembling narrative thrust is quickly discarded, and if it wasn’t for the film’s sumptuous production values, it would be very easy to mistake Obecná škola for a feature-length sitcom episode.

Endless lavish crane shots swoop over and around the action, and Jiří Svoboda’s swooning, ultra-sincere score makes a good job of making the film seem far more weighty and prestigious than it actually is. Anything dark and distasteful, particularly about Hnízdo’s chequered past is scrupulously avoided, leaving a loosely connected shaggy dog story so sweet and sentimentally lensed that looks like it was dipped in honey. It makes Cinema Paradiso, Giuseppe Tornatore’s big sloppy kiss of a movie which won Best Foreign Film at the Oscars a few years earlier, look like a hard-edged slice of social realism.

Obecná škola shares many similarities with Tornatore’s love letter to cinema, not least its rose-tinted view of childhood set in the aftermath of the Second World War. It also recalls Dead Poets Society, released a few months before the Velvet Revolution, in its portrayal of an unconventional teacher inspiring a group of students.

Masaryk University invited me to introduce the film to a group of incoming foreign students, so I watched it twice within a week. The first time around I felt it was over-rated. I couldn’t understand why someone, just after the fall of Communism, would want to make a film about the short period of time before the Communists took hold, and determinedly say nothing about the subject.

That is one of the dangers of reviewing films made in your adopted homeland when you come from a country with a far less turbulent political history – you can fall into the trap of expecting every Czech film to tell you something meaningful and insightful about what life was like during that period.

I’m glad that I saw Obecná škola a second time with the students I was introducing it to, because I could see how the jokes landed and how enjoyable the film was to a foreign audience. And I laughed, far more than the first time around, and realised it was perfectly OK for the movie to be just warm and funny and not have anything deep to say about politics or history. And I was a little pissed off with myself for not accepting it for what it was the first time.