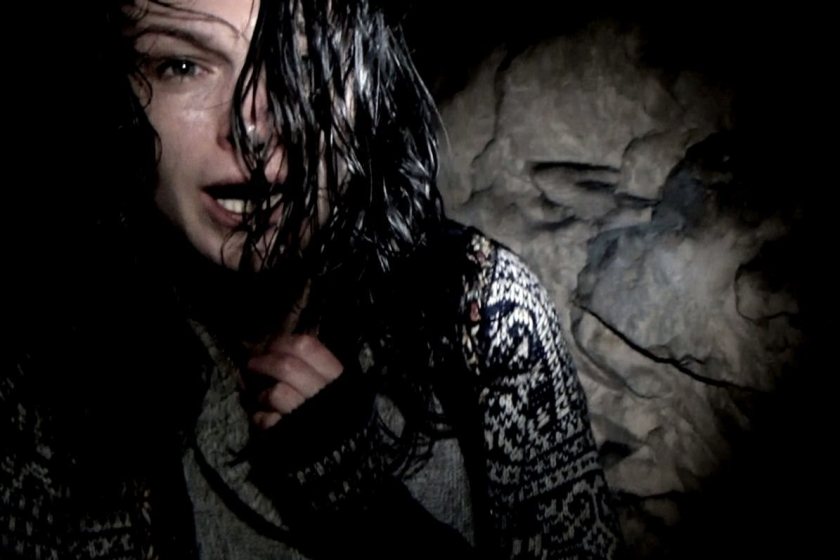 This is the blurb on Netflix for Petr Jákl’s Ghoul:

“Three filmmakers investigating a story about cannibalism during a 1932 famine find themselves trapped in a haunted house after conducting a seance.”

Holy shit, I thought, this movie has it all… cannibalism! a haunted house! Seances! Directed by the action-packed former stuntman who gave us the hugely enjoyable Kajinek! How could I refuse?

Unfortunately, despite its lurid premise, Ghoul doesn’t hit the spot quite as well. Jákl’s everything-including-the-kitchen-sink approach that worked so well in his wrongly accused hardman thriller works to the detriment of this by-the-numbers found-footage horror, bogging the movie down with evermore plot when we should be getting to the scares…

We start in very familiar territory (did someone say Blair Witch?) and stay in familiar territory for almost the whole movie. After some title cards telling us about the real-life horrors of Ukraine’s man-made famine in 1932, where millions died and cannibalism was rife, we meet three intrepid filmmakers who are in the country to make a classy sounding documentary called “Cannibals of the 2oth century”. There’s Jenny (Jennifer Armour) the presenter and ringleader; her boyfriend Ryan (Paul S. Tracey) and non-entity Ethan (Jeremy Isabella).

Through their guide Valeriy (Vladimir Nevedov) and translator Katarina (Alina Golovlyova) they arrange to meet Boris (Yuriy Zabrodskyj), a hulking villager who was banged up for murdering and cannibalising his victim. Under hypnosis he told doctors that supernatural forces made him do it, but the locals all seem totally cool with him now, despite other people going missing in the area.

Boris couldn’t possibly look any more like a murderous cannibal, and he offers to give an interview at the scene of the crime. He gives the gang a big bunch of creepy rusty keys to a creepy murder shack set in the middle of a remote creepy forest and says he’ll join them there later to give them the scoop.

Rather than heading back to Kiev and catching the first flight out, our gormless trio jump in the van with Valeriy and Katarina and head out to the murder shack, picking up a local “witch” called Inna (Inna Belikova) along the way, just in case they want to do a seance and make things even scarier. Boris’s murder shack is your typical Cabin in the Woods set up, the last place you’d want to meet up with a guy like Boris or get a local witch to perform a seance. Still, Jenny and her crew still have eyes for that sweet cable TV money if they can pull it off, and carry on regardless.

Boris is a no-show but they decide to stay the night anyway, which doesn’t go down too well with Inna – apparently, a little boy was eaten there back in the days of the Holodomor, and it was the place where Boris did his cannibalising.

They try to make the best of it, with their hosts serving up a traditional Ukrainian supper of raw bacon and vodka, and Valeriy offering to take them out to experience some traditional Ukrainian pastimes like hunting deer with a machine gun or fishing with grenades. Bumping into characters like Valeriy is one of the things I’ve always loved about Eastern Europe…

Once they’re all bladdered on vodka they move onto a seance, which Inna performs on a handy ouija board that has been pre-carved in the form of a pentacle on the kitchen table.

In the morning, Valeriy has gone and Inna tells them that they mustn’t disturb the glass they used for the seance and that they will die if they try to leave. Just what you need to hear first thing with a stinking hangover. They’re now stuck an hour from civilisation and creepy things are starting to happen. Inna knows things about the crew that she couldn’t possibly know, and there’s some creepy footage on Ryan’s camera of a creepy box in the creepy attic that he doesn’t recall shooting…

If you’ve seen any found footage movies in the twenty-odd years since The Blair Witch Project, you’ll have a pretty good idea about how this is all going to play out. Jákl – who writes, directs and produces – seems to think cliches are handy building blocks to slap together and make a film, and once again he acts like the greediest guy at an all-you-can-eat movie buffet, piling his plate high with as many genre tropes as possible.

To his credit, Jákl establishes the backstory and the mood well in the opening act, seeding just enough unsettling details to set up the rest of the movie. Unfortunately, his penchant for excess comes into play in the middle section of the film – not only have we got Boris the cannibal lurking about somewhere (or do we? Spoiler alert: of course we do…), we have the evil spirit of a local serial killer who also liked to chow down on his victims, some demonic possession, talk of ghosts and demons, clues buried in the barn, tunnels to explore under the house, and a mutilated cat that looks like a leftover prop from Re-Animator. Not only that, but we also get a whole lot of shouting and squabbling as the fear sets in.

It’s a lot, and it also means that we have the gang running around from one plot point to the next without pausing to generate any real sense of dread. That was why The Blair Witch Project worked so well, and still works today. It sets up the legend the filmmakers are investigating in the first act, lets the fear build through a series of subtle and disquieting details in the second before pulling out all the stops in a terrifying finale. In Ghoul, I was too busy trying to second guess the story and figure out what the rules were to be scared – so, we’ve got the evil spirit of a serial killer, who can possess… how many people at once? One? Two? All of them? It’s not quite clear.

The influence of The Blair Witch Project is obvious, although Jákl seems to have misunderstood what made that movie so scary in the first place. In showing very little, Blair Witch‘s horrors occurred mostly in our imaginations. Instead, Jákl relies too heavily on gore, violence and badly timed jump scares, and for the most part it doesn’t work.

That said, after the overstuffed middle section that somehow manages to really drag despite being packed with incident and detail, the predictable conclusion in the creepy tunnels is still effective. I wondered if Jákl took inspiration for this section from The Borderlands, probably the best found footage movie since The Blair Witch Project. Even though I knew exactly where it was going, I was still watching over the top of my glasses – I’m short-sighted so that’s my equivalent of hiding behind the sofa during a scary movie.

Overall Ghoul is shamelessly derivative and utterly predictable. Having said that, if found footage movies work on you, then no doubt the final 10-15 minutes will work on you too. You just have to sit through a lot of pretty mediocre stuff to reach it.