Recently, I’ve been reviewing films that dealt with more social and political issues, but this time around, I’m kind of glad to be reviewing a film that focuses on a much more easy-going subject: adolescence. Black Peter — the first feature-length film directed by one of the most celebrated filmmakers of Czech Cinema, Miloš Forman (Loves of a Blonde, The Firemen’s Ball) — focuses on the life of a young man named Petr (Ladislav Jakim) and his journey through adolescence. 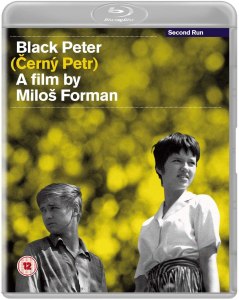 The film begins with Petr on his first day working at a supermarket. He is tasked to keep an eye on the customers and to make sure that they aren’t stealing any of the merchandise, but he is so oblivious to the concept of subtlety that he easily exposes himself. He then proceeds to follow a man he believes may have stolen some merchandise by walking right behind him. Unfortunately, he never really confronts him. This is an interesting way to convey just how young and inexperienced Petr is and how much he has yet to learn…

Once he arrives home, his father scolds him for the way he handled the situation, and for his general lack of common sense. It’s clear that there’s a disconnect between Petr and his father, and this primarily due to the generational gap. His father is a traditionalist who wants to turn Petr into a man by toughening him up. He even goes on a sexist rant where he talks about how men are supposed to “save the day” since women occupy most of the positions in the shops. His mother, on the other hand, is incredibly overprotective of him. It’s pretty evident that his relationship with his parents has had some sort of effect on him and could be the reason for his indecisive nature.

But when he’s not getting lectured by his father, he likes to spend time with a girl named Pavla (Pavla Martinkova). They spend some time together sunbathing at a lake where they meet two bricklayer trainees, Čenda (Vladimír Pucholt) and Zdeněk (Zdeněk Kulhánek). Later that evening, Petr and Pavla go out on a date to a dance party. The dance sequence is probably the highlight of the film since it demonstrates all of the emotions and uncertainties running through the minds of these teenagers in this type of environment. It really shows just how uncomfortable the social interactions between teenagers can get.

For example, at the dance, we see one of the bricklayers, Čenda, awkwardly flirt with a girl he’s interested in by sitting next to her, briefly speaking with her, and then leaving her by herself multiple times. He mostly serves as comedic relief since he constantly argues with Petr and acts like a dullard most of the time he’s on screen. The character perfectly encapsulates the clumsiness that comes with youth and his interactions grow even more bizarre as the film goes along.

I appreciate how the film doesn’t have any real sense of direction. Much like Petr, the film just does whatever it wants to do. It’s more of a collection of moments in the life of this young boy as he tries to find his place in the world, all the while dealing with the usual struggles like love, family drama, and other social interactions. It’s basically a slice of life story that focuses on the awkward stage of adolescence. That moment in time where you don’t have any real direction in life and are allowed to be more easy-going as you figure things out for yourself.

Black Peter does a good job of capturing those days of youth by presenting familiar scenarios, like a day at the lake or a night at a dance party. It’s no wonder why Miloš Forman would go on to become one of the leading filmmakers that would put Czech cinema on the map. His storytelling abilities can be seen in full effect as the narrative conveys the life of a teenager in their formative years. And it’s even more impressive knowing that this was just the tip of the iceberg in his career as a filmmaker.