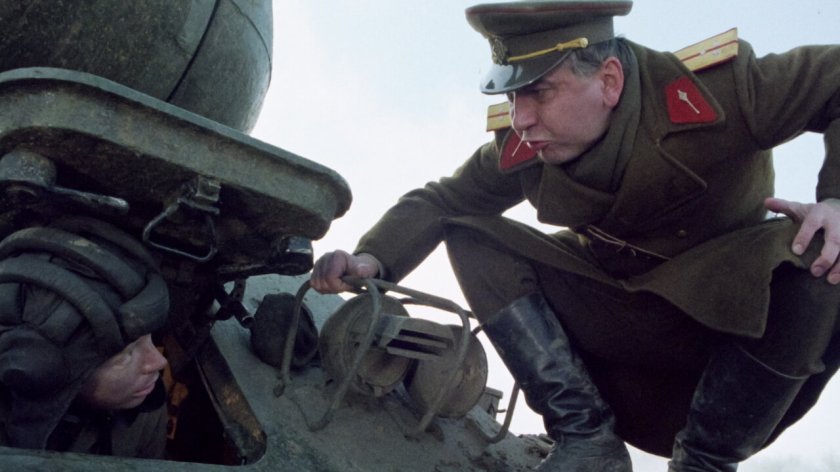 Based on the semi-autobiographical novel by Josef Škvorecký, the film is set in 1953. We meet intelligent, demob-happy Staff Sergeant Danny Smiřický (Lukáš Vaculík) who has almost finished his two-year stint in compulsory military service. In between tank manoeuvres and covering his mate’s guard shift in the stockade, there’s little for him to do apart from smoking cigarettes, try to avoid flak from his perpetually enraged commanding officers, and dream about an unobtainable girl he once knew in Prague.

He’s almost made it to the end of his service, but now he risks trouble by getting into an affair with an officer’s lonely wife. Tensions are also growing between the conscripts and the officers, culminating in a dangerous drunken standoff…

Tank Battalion was a hit on release and is still regarded as a classic. It resembles a more light-hearted Czech version of the first half of Full Metal Jacket, just without the midnight bathroom bloodbath. While the film is almost aggressively comic in tone – including some horrible sped-up motion – what struck me was how bleak and bitter the movie is. For all the dick-and-fart humour, it is threaded with an undeniable sense of self-loathing – perhaps the English language title of Škvorecký’s novel is informative: The Republic of Whores.

The film hates the officers loyal to the regime, depicting them as stupid and bullying as they constantly yell Communist slogans and rhetoric, and satirizes them as petty, humourless bootlickers. Yet it also saves plenty of anger for Smiřický and his comrades.

Smiřický gets away with it quite lightly, presumably because he is the author’s alter ego and also acts as an audience surrogate. We watch the shenanigans of his comrades through his eyes, and they are invariably portrayed as a boorish, crude, loud, drunken bunch of idiots. It made me think of the contrast between these guys and the downtrodden but still proud junkyard philosophers of Menzel’s Larks on a String – those characters still aspired to a higher ideal, while this bunch are content to just “Švejk” their way through their service, as one officer complains.

It’s not hard to see the dynamic between the devoted officers constantly bellowing threats and the slouching, indifferent conscripts as a microcosm of the country as a whole during the Communist regime. The film feels like an act of merciless self-reflection after the agonies of the previous forty-odd years.

I’m reliably informed that Tank Battalion is a really quotable movie and much of the humour gets lost in subtitles. That leaves the non-Czech speaking viewer with lots of shouting (legend Miroslav Donutil accounts for at least half of it), dick jokes and people setting their farts on fire. If that’s your level of humour then go ahead and fill your boots.

Otherwise, I’m not sure I can fully recommend Tank Battalion to non-Czech speakers like myself. The storyline is pretty flimsy, acting as a clothesline to hang a bunch of comic sequences on, which don’t amount to much without the wordplay. Beyond that the filmmaking is workmanlike and the performances so-so. I suppose it’s worth an hour-twenty of your time if you’re interested in the country’s history and cinema. And tanks. There’s plenty of tanks.

Tank Battalion (Tankový prapor) is showing on Czech Netflix at the time of writing. This article was originally published by the Prague Daily Monitor.