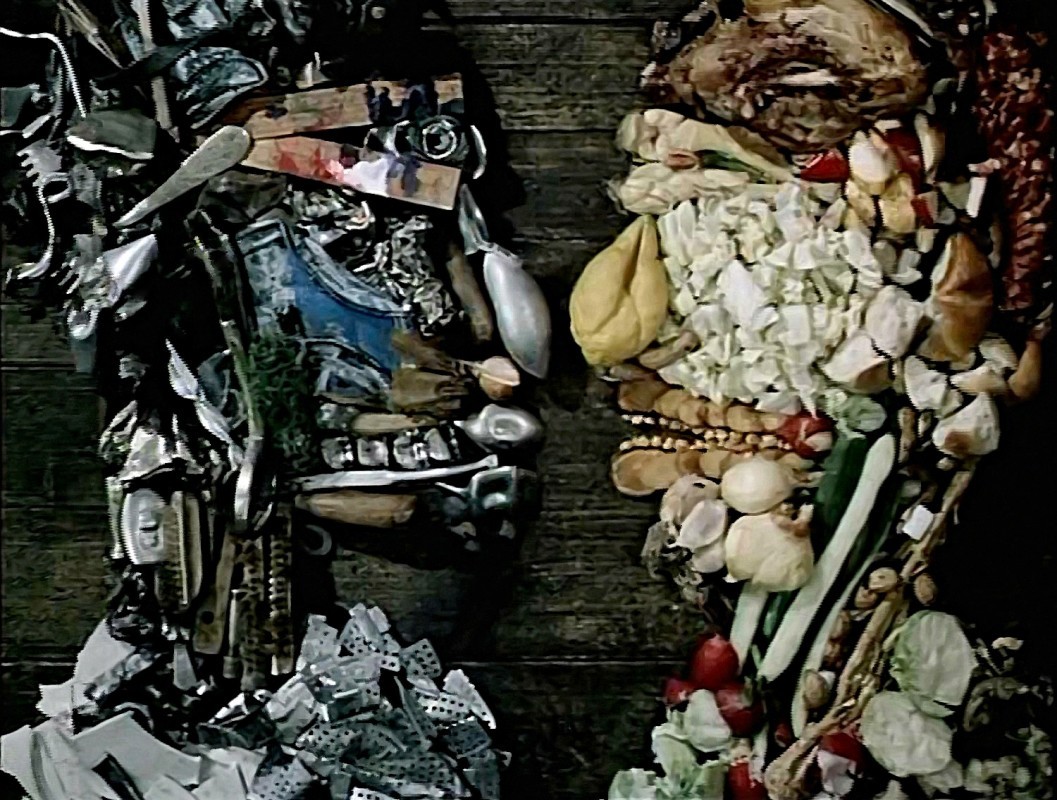 Reader, I screwed up. It was deadline day for my latest review and I was up against it, having just moved into an old house in the countryside. The place doesn’t have a working kitchen, bathroom or heating system. As I type this, I’m pressed against an oil radiator wearing four layers of clothing and a blanket wrapped around me. In desperation, I reached for a movie to review on Netflix. Only when I got to the end did I realise that it was a Slovak film.

Perhaps the cold has got to my senses. While I don’t speak Czech, I have lived in the country long enough to tell the difference between the Czech language and Slovak. But not on this occasion…

Luckily my good friend and former writing partner sent me a short film some time ago which I’ve been meaning to watch. It is Dimensions of Dialogue by legendary surrealist filmmaker Jan Švankmajer. It is only 14 minutes long so you can watch it in your lunchbreak and it will give you far more food for thought than the 90 minutes of romantic comedy dross I sat through earlier…

Created entirely with stop-motion animation, Dimensions of Dialogue is divided into three shorter pieces. A triptych, if you will (the ice crystals forming in my brain have allowed me to remember that word).

The first piece, “Eternal Conversation”, features a series of Arcimboldo-like heads who meet, devour each other and spew out a less distinctive head each time. One is made up of fruit and vegetables, another is stationary equipment, and yet another is kitchen items. The animation is vivid and surprisingly violent, as each interaction sees the one conversing head destroy the items comprising the other. Foodstuffs are brutally peeled, shredded, gouged, squashed and chopped up by a variety of items from the kitchen drawer – apples disembowelled by spinning door keys or garrotted by tape measures, etc. Afterwards, Kitchen Drawer Guy goes on his way until he encounters Office Stationery Man, who devours him in turn.

This process continues with each head getting stripped down to less distinct parts. In the end, we are left with two identical clay busts, who then eat each other and spew out endless exact copies. 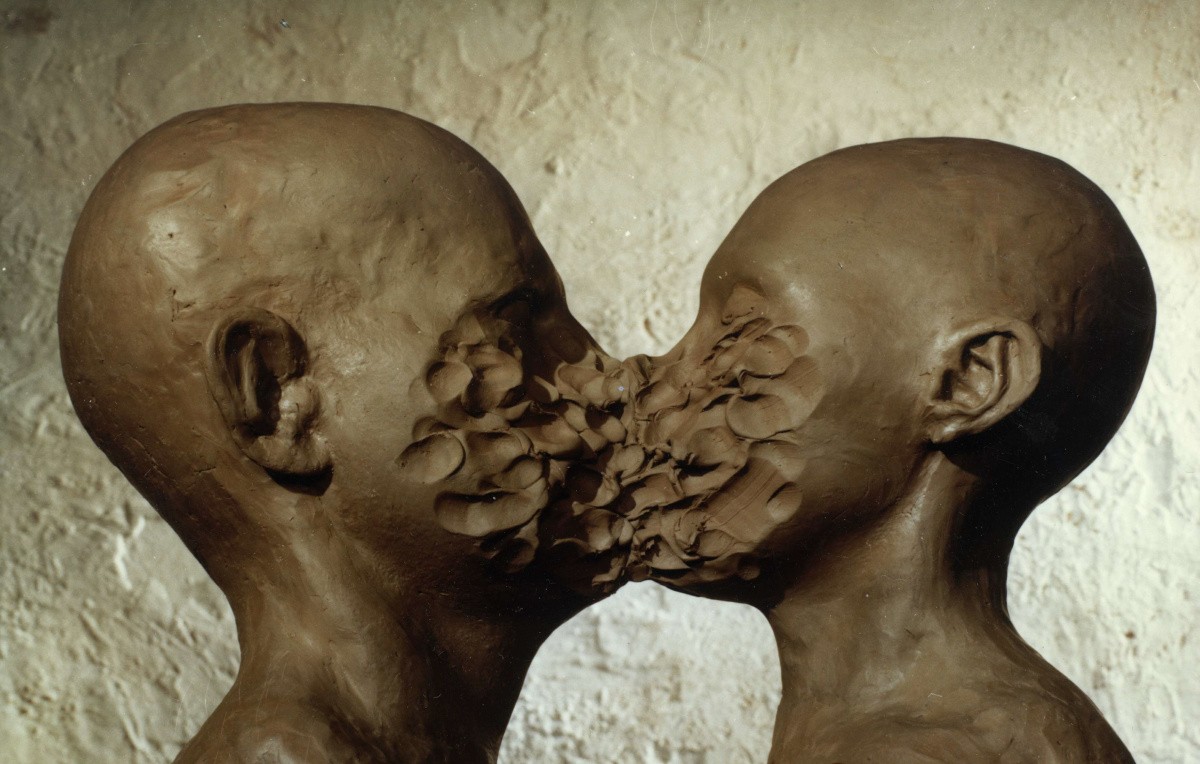 Next up is “Passionate Discourse”, which begins tenderly with clay models of a naked man and woman sitting opposite one another across a table. They notice one another, hold hands, caress. Then, as they kiss and start making love, they merge into a single undulating mass. When they separate again, there is a bouncing blob of clay left on the table between them. The blob tries to get their attention, but neither then man or woman wants anything to do with it, batting it back and forth. Eventually, this dispute over the ownership of the blob degenerates into horrific violence as they claw each other’s faces off.

Dimensions of Dialogue concludes with “Exhaustive Discussion”, where we start with two busts of balding middle-aged men eyeballing each other across the table. Despite their aggressive facial expressions, their dialogue at first proceeds smoothly as one produces a random item from his mouth – a shoe, a toothbrush, a slice of bread – and the other spits out a corresponding object. So shoelaces match and compliments the shoe, toothpaste matches toothbrush, and so on. However, when the heads start spitting out mismatching objects – shoe vs toothpaste, for example. This leads to destruction and mess until the two heads lay broken and exhausted. 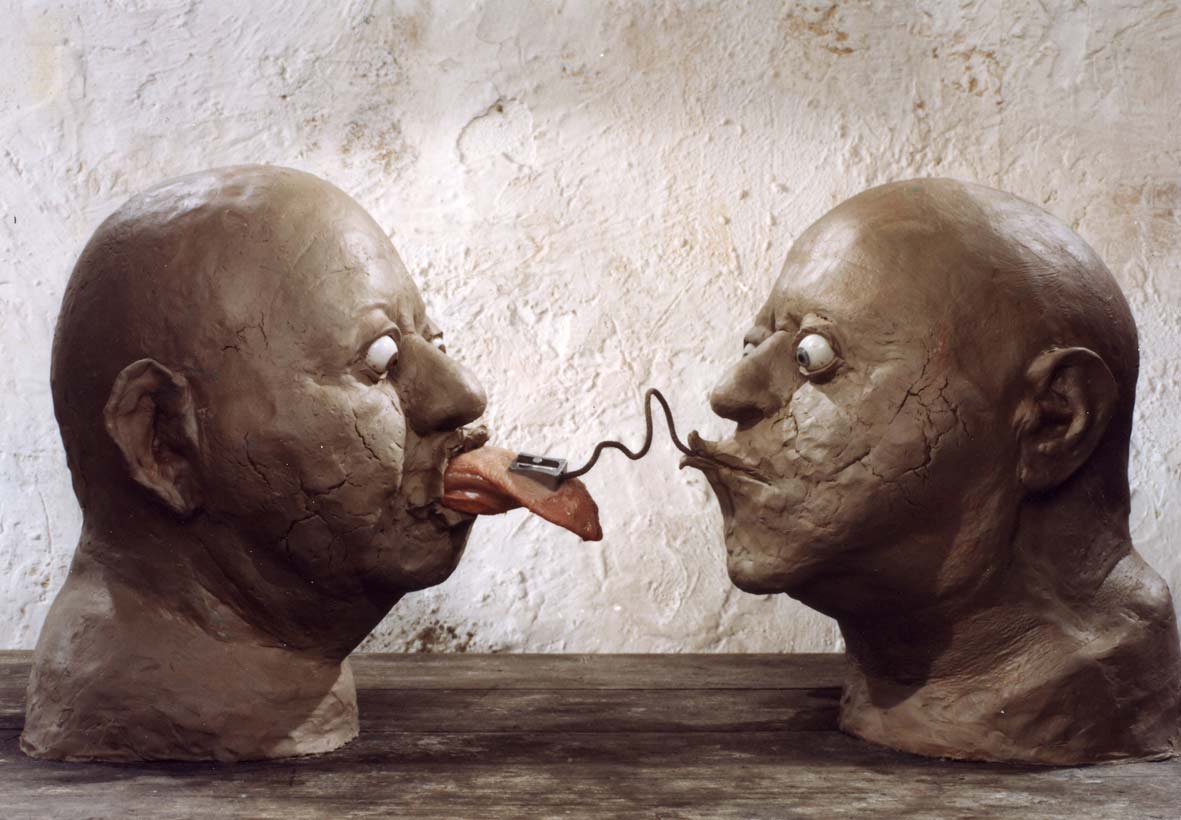 Švankmajer spoke of his love for everyday items and how he wanted to make them the lead characters in his films. He often used ordinary objects in extraordinary, surreal ways in his animations. You know what each object feels like and what texture it has. You know how heavy or dense it is. This makes his films a very tactile experience.

He also used these objects to explore abstract ideas in his shorts, and Dimensions of Dialogue is no different. They are also open to interpretation, inviting the viewer to discover their own meanings.

It is interesting to consider it from a modern perspective because our world and modes of communication have changed so significantly since the film was made. If each head in the first piece represents a set of ideas or a sense of self, we can see how it loses its identity the more it gets regurgitated. Something similar is happening now on social media as some people choose to communicate through emojis or memes instead of a written response. By doing this, their opinions and personalities become a mishmash of regurgitated ideas and images, without any hint of their real thoughts or personalities. Meanwhile, images get repeated over and over as memes until they lose all sense of their original purpose.

That is my response to “Eternal Conversation”, as I am sat here half frozen to death and wondering if I’ll ever see the spring. I’ll spare you my thoughts on the other two for a warmer occasion, like in the pub over a few pints. While it may be short, Dimensions of Dialogue is vivid, vulgar, gross, funny, and best of all, thought-provoking. If you like movies to give you something to think about, you should delve deeper into the weird world of Jan Švankmajer.

You can find a watchable copy of Dimensions of Dialogue on Youtube here. This article was first published by the Prague Daily Monitor.

One thought on “Dimensions of Dialogue (Možnosti dialogu) – Jan Švankmajer, 1983”