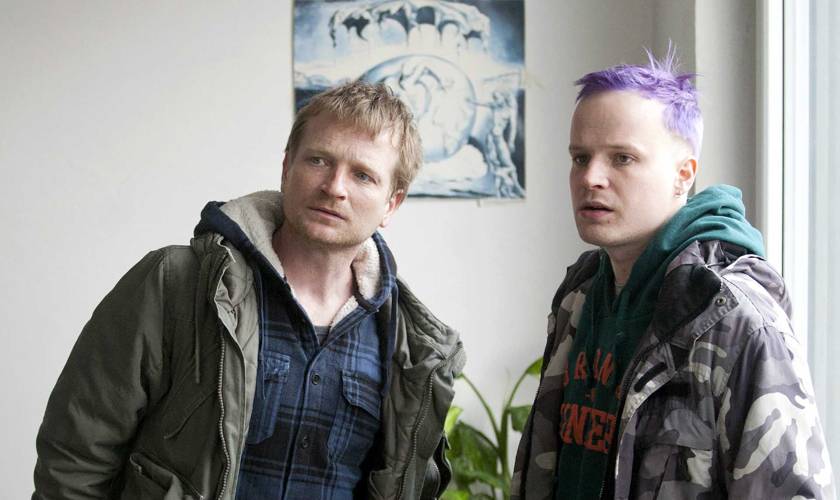 Right from the get-go, we know Petr “Cobra” Šťastný (Kryštof Hádek) is trouble. We open with a scrolling shot of summer cottages. It is a quiet day apart from birdsong and the distant sound of someone mowing grass. Against this peaceful backdrop, we see Cobra, strutting along with purple hair, a camo jacket and a pair of bolt cutters strapped to his back. We don’t know what his situation is yet but he’s wired, a bundle of nervous energy. He then proceeds to break into a cottage, steal all the electrical goods and make off with his loot, all under the nose of an elderly neighbour.

Cobra is one half of the Snake Brothers, two guys in their thirties trying to eke out a living in Nowheresville, CZ, in Jan Prušinovský’s impressive film follow up to Sunday League. The elder Šťastný sibling is Vojtěch (Matěj Hádek, Kryštof’s real-life big brother), known as “Viper” to his friends. He’s marginally more well-balanced, in that he is capable of getting a job and living a semi-normal existence. No matter how hard he tries to get a foothold, he is held back by his disreputable younger brother, who is always getting himself into trouble with the law.

The Snake Brothers form a trio with Tomáš (Jan Hájek), Viper’s best friend. He’s a dour, frustrated mechanic and abusive husband to the irresponsible Zůza (Lucie Žáčková), who has been hanging around on maternity pay for the past eight years while bringing up their two kids.

After Viper angrily quits his job at a factory, an old school friend, Ládík (David Máj), offers him an opportunity to become a franchisee for a German company importing cheap fashion wear. Viper sees it as a chance to better his life but doesn’t have the ready cash to make a go of it. Luckily his granny (Věra Kubánková) is happy to put her house up as collateral.

Ready for business, Viper rents a unit in a shopping centre and hires Zůza as a cashier while also trying to keep Cobra away from his customers. It turns out that Ládík is using the venture to import more than just budget brand shoes. Plus the combustible combination of Cobra, Zůza and Tomáš means that trouble is never far away…

Kryštof Hádek’s attention-grabbing performance as Cobra recalls Paddy Considine’s turn in A Room for Romeo Brass. He is a character who is comical, threatening and uncomfortable to spend time around. Cobra is the kind of guy you cross the road to avoid if you see him coming, or pay up at the bar to get away from if he starts talking to you in a pub. It’s a showy role but Kryštof commits fully, and the character becomes more textured and tragic as the story progresses.

Cobra seems to suffer from a combination of mental illness, social deprivation and domestic dysfunction, creating a person who can’t function normally in society. He is unable to control his behaviour, which creates a Sisyphean task of keeping him on the straight and narrow for his big brother. The performance is even more impressive coming from an actor like Kryštof Hádek, who I’ve always thought was a pleasant but lightweight screen presence in movies like Dark Blue World, 3 Seasons in Hell and the Grapes series.

Matěj Hádek is superb as Viper, a natural-born loser looking back on a lifetime of failure and missed opportunities. As a heavy-drinking singleton, he’s the marginally more sensible one of the pair. It’s a small town and whenever Cobra gets himself into a spot of aggro, everyone knows who to call. Viper has little time for his incorrigible younger brother, bailing him out of trouble through a sense of familial duty rather than love. At the same time, he displays a similar streak of impulsiveness, showing he and Cobra aren’t as different as he’d like to think.

The Hádek brothers play off each other beautifully, and I’m glad to see that they were both rewarded at the Czech Lion Awards. Matěj picked up Best Actor while Kryštof took home Best Supporting Actor. At the Academy Awards, you often see the flashier role take the prize while more solid work goes unnoticed. I immediately thought about the dynamic between Jeff Bridges and Robin Williams in The Fisher King – Bridges put in arguably the best performance of his career but wasn’t even nominated, while Williams bounced off the walls and got an Oscar.

Lucie Žáčková also won Best Supporting Actress for her part as Zůza, and she leaves a strong impression. It’s a portrayal of keenly observed desperation as a woman in her mid-thirties who feels trapped in her role of wife and mother. It’s hard to watch her act in a way more befitting a stroppy teenager, but it is a raw performance that acknowledges a sad truth – some mothers feel alienated and angry within a domestic role they find themselves in.

The Snake Brothers is a world of shady pubs, forgotten shopping precincts, seedy pawnshops, dismal karaoke nights and crappy discos with empty dancefloors. Within this milieu, Prušinovský displays an assured eye for the details of everyday working-class life. Like Shane Meadows, his characters inhabit a dead-end world but he doesn’t wallow in their misery, taking a blackly comic tone that also celebrates the tenacity and pithy humour of the working class.

Some critics have blamed the rambling, episodic nature of The Snake Brothers on the director’s lengthy resume in TV work, but I think it benefits the film. It creates the sense of a larger, chaotic life lived beyond the parameters of the movie’s run time. It feels like these characters were living there long before I dropped in to watch the film, and are still living there now.

Prušinovský also avoids mawkishness by keeping his characters resolutely unlikeable, adding to the realism. That’s not to say he doesn’t love them. As with his previous feature film, Sunday League, the director is fully invested in bringing these damaged souls to kicking, screaming, vulgar life. So while we might not like them either, it’s impossible not to feel a deep sense of compassion, or even kinship, towards them.

I’m a sucker for a chunky slice of social realism so The Snake Brothers stood out as one of the best modern Czech movies I’ve seen to date. There are some solid films out there from the last twenty years, but there is always the nagging doubt that Czech cinema simply isn’t as good as it was back in its heyday. The Snake Brothers is one film that can stand comparison with some of the greats.

The Snake Brothers is showing on Czech Netflix at the time of writing. This article was first published by the Prague Daily Monitor.