Co-written and directed by Jan Svěrák (Kolya, The Elementary School), Accumulator 1 is an entertaining film that features a lot of interesting ideas, but they just don’t come together in a way that’s coherent enough to justify their existence.

The film features a pretty bizarre premise: people who have appeared on television are suddenly losing their energy and dying. The main character, a self-conscious man named Olda (Petr Forman) turns into a recluse after he misses his shot with the girl he’s interested in. He becomes so lethargic that all he does is watch TV for a whole week and loses consciousness for a couple of days. The paramedics save him by barging into his apartment, and at the hospital, he meets a mysterious man, Fišarek (Zdeněk Svěrák), who heals him with his special abilities. 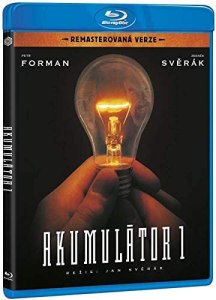 Fišarek refers to himself as a natural healer. He helps people that have also suffered from the same condition as Olda. To reinvigorate himself, Fišarek advises Olda to gather energy from natural sources like exercise, the life force of trees, paintings, and even sexual stimulation. He teaches Olda how to harness the energy from these sources, and even shows him how to transfer energy over long distances…