Jiří Menzel’s Closely Watched Trains (Ostře sledované vlaky) is probably one of the best known Czech films beyond the country’s borders, having won the Oscar for Best Foreign Language Film in 1968. Adapted from Bohumil Hrabal’s slender novel, it was also the first Czech movie I saw by a long way, years before the idea of even visiting the country crossed my mind, let alone immigrating here.

I was pretty underwhelmed on first viewing – it was when I was first getting heavily into film, after the treble-whammy of Pulp Fiction, Seven and Trainspotting first made me conscious that there was a director behind the camera making decisions resulting in the movie I saw up there on the big screen.

I could handle the nonlinear structure of QT’s early efforts, but struggled a bit with the rhythm and pace of my first Czech movie – having been brought up on a diet of largely British and American films, usually with a distinct beginning, middle and end, Closely Watched Trains seemed a lot like all middle with a little bit of end.

I was also distracted by a basic similarity to an old British sitcom, On the Buses. It was a bawdy comedy following the exploits of Stan and Jack, a bus driver and his mate, who spent most of their time trying to “get their leg over” with the various “bits of crumpet” working at the depot. Their shenanigans invariably incurred the wrath of their nemesis, the frustrated, uptight Inspector Blake, or “Blakey” as he became known in British popular culture.

Closely Watched Trains follows the exploits of a gormless young man, Miloš Hrma (Václav Neckář, Larks on a String), who gets a job as a station guard at a sleepy village railway station during the Nazi occupation of Czechoslovakia. There’s not much work to do, so under the tutelage of a senior colleague, train dispatcher Hubička (Josef Somr), he pursues the female rail staff in the hope of – to use some On the Buses parlance – “getting his end away” for the first time. Their shenanigans invariably incurs the wrath of their uptight, frustrated station master boss, (Vladimír Valenta), who has a touch of Oliver Hardy about him.

Beyond the basic set up, On the Buses and Closely Watched Trains don’t have too much in common, but give an interesting contrast between Britain and Czechoslovakia at a specific point in time. On the Buses debuted a year after the film’s Academy Award victory, and around six weeks after Jan Palach set himself alight in Prague’s Wenceslas Square.

On the Buses was cheap, smutty, old-fashioned, sexist, racist, and deeply conservative, a good representation of Britain at the time, an ailing country still recovering from World War II. Closely Observed Trains, from a young director of the Czech New Wave, was fresh, breezy and lightly subversive, made against the backdrop of social upheaval and ill-fated rebellion against Communist rule and Soviet intervention. Like many Czech films, it is also preoccupied with sex and has a leisurely narrative until Miloš’s late, sudden decision to become a resistance hero against the Nazis.

Co-written by the director and Hrabal, Closely Observed Trains is a fairly light-hearted romp, without any overtly political rabble-rousing. However, it doesn’t take a massive leap of imagination to draw an analogy between the Nazis and the Soviets, and the film’s overall message seems to be: “If you don’t like it, man up and do something about it!”

In the logic of the film, Hrma can only be a man once he’s lost his virginity, and after an embarrassing moment with a pretty conductor, eventually gets deflowered by a foxy resistance agent. Manhood achieved, Hrma is ready to take on the Nazis.

The film pokes fun at the crumbling Nazi regime, which a pompous local collaborator tries to pass off as a masterful tactical retreat by the Führer. Hrabal’s voice is most recognizable in the opening scenes, describing Hrma’s family of layabouts and charlatans, including a phony hypnotist who formed the country’s last line of defence against the invading forces. In those moments, the ghost of the Hašek’s Švejk also lingers at the edge of the frame.

Closely Watched Trains is beautiful to look at, lensed in lucid black and white by Jaromír Šofr. I love the contrast between the wintry outdoor scenes and the softly lit indoor shots. To me, it looks as if everything is slightly stained by soot from the passing locomotive’s furnaces. The loose comic tone is assisted by Jiří Šust’s cheerful, sarcastic score.

As with many Czech films, the pace is leisurely, driven by characters and situations rather than plot. I think the episodic, anecdotal nature of movies from this country is partly the reason why foreigners sometimes have difficulty taking to Czech cinema.

Closely Watched Trains is a charming, amusing and undemanding movie, perfect for anyone looking for an introduction to the films of the Czech New Wave of the Sixties. 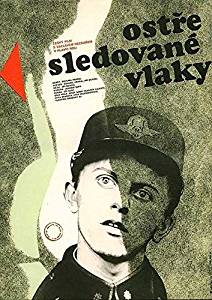 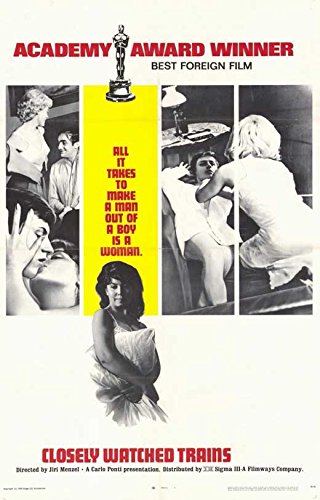